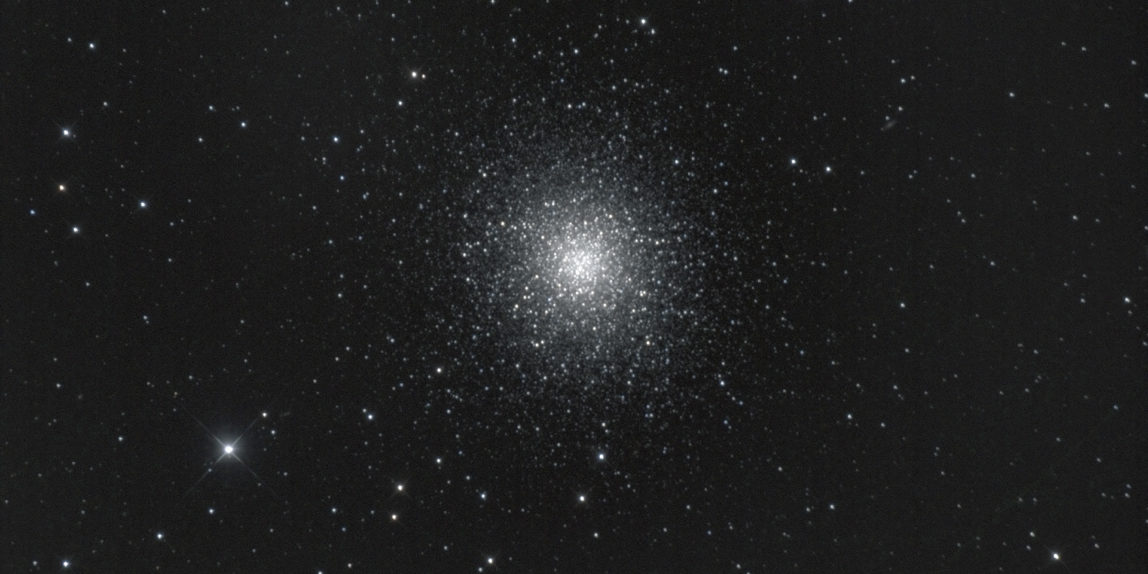 Messier 13 or M13, also designated NGC 6205 and sometimes called the Great Globular Cluster in Hercules or the Hercules Globular Cluster, is a globular cluster of several hundred thousand stars in the constellation of Hercules.

M13 was discovered by Edmond Halley in 1714, and cataloged by Charles Messier on June 1, 1764 into his list of objects not to mistake for comets; Messier’s list, including Messier 13, eventually became known as the Messier Catalog.

With an apparent magnitude of 5.8, it is barely visible with the naked eye on clear nights. Its diameter is about 23 arcminutes and it is readily viewable in small telescopes.Nearby is NGC 6207, a 12th-magnitude edge-on galaxy that lies 28 arcminutes directly northeast. A small galaxy, IC 4617, lies halfway between NGC 6207 and M13, north-northeast of the large globular cluster’s center.

With the bad weather the last days I was not able to setup guiding and calibrate it together with the new focuser.

When I completed the setup – iPolar works like a charm and I had this step in 5min – and fired up the mount and cams I stated that I didnt reach focus with either of the scopes. Messing around with equipment and focuser I finally got everything resolved including that I earlier mounted the top of the camera in an 90° rotation … and it took me 15min to find out why it would not photograph stars when I started the focus run. Fixed it fired it up and did several rounds of calibration runs for guiding and focus on M13 – later was able to add some short RGB ones to the L but as clouds closed in it was just quick and dirty. M13 is an object to invest a few hours integration time on another day. Always fascinated by Globular Clusters …